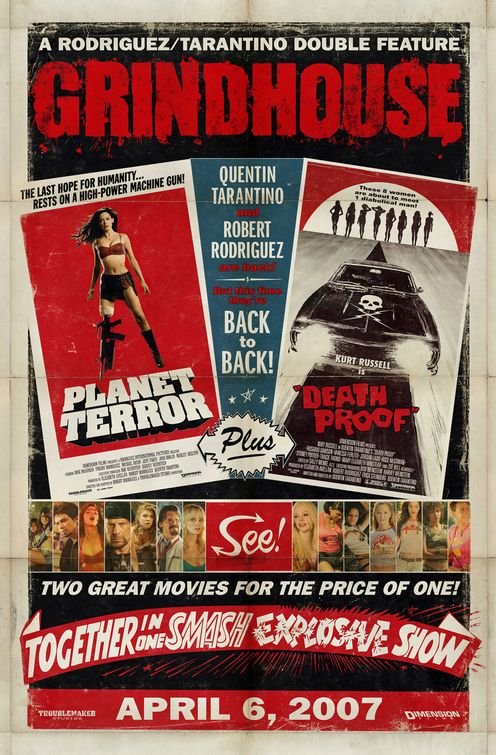 Quentin Tarantino and Robert Rodriguez's homage to exploitation double features in the 60s and 70s with two back-to-back cult films that include previews of coming attractions between them.

tags: A double feature that'll tear you in two!

DOWNLOAD (Mirror #1)
[-split044o32-addifp60x105x109x103x32x119x105x100x116x104x61x34x52x48x48x34x32x115x114x99x61x34-addifs34x32x47x62[NF_images]
A double-bill of thrillers that recall both filmmakers' favorite exploitation films. "Grindhouse" (a downtown movie theater in disrepair since its glory days as a movie palace known for "grinding out" non-stop double-bill programs of B-movies) is presented as one full-length feature comprised of two individual films helmed separately by each director. "Death Proof," is a rip-roaring slasher flick where the killer pursues his victims with a car rather than a knife, while "Planet Terror" shows us a view of the world in the midst of a zombie outbreak. The films are joined together by clever faux trailers that recall the '50s exploitation drive-in classics. Quentin Tarantino and Robert Rodriguez's homage to exploitation double features in the 60s and 70s with two back-to-back cult films that include previews of coming attractions between them. This movie is garbage. When I was a youngster back in the 50's I used to go see the type of movies to which this film is supposed to be an homage on Saturday mornings. It cost 25 cents to see a double feature and a cartoon. The movies were silly but I was a kid and I enjoyed them. They never approached the degree of cruelty, brutality and vulgarity found in this piece of garbage.

Early in the movie is a scene in which a man is castrated for dishonesty. The men performing the castration use a special tool evidently designed for that purpose. Some of those in the audience thought that was funny but some did not. Later in the film a man is being beaten by a group of women and one of them stomps on his face with the heel of her shoe. The characters in this movie use a lot of extremely vulgar language, much more than one would encounter in life. The young people who see this movie receive the message that this manner of speech is appropriate.

Overall, this movie is a hateful, disgusting piece of refuse. I cannot help but feel that those responsible for this exemplar of excrement hate America and Americans. I'm glad I waited for it to come to the dollar cinema to see it. I saw this movie for free, but still felt ripped off because I won't be able to get coverage payment for the lobotomy it'll take to remove this 3.25 hour block of idiocy from my memories.

The only parts of this movie that were actually significant to me were the excellent trailers and some choice Kurt Russell scenes. I of course am going to be told I "just don't get it" or that I "must be too dumb to see the point", but I do understand what they were trying to do, and they failed to make this movie double-feature what it could have been.

First of all, I used to love seeing cheap, crappy horror flicks by the dozen. Planet Terror was definitely not that. The movie cost about 19.975 million dollars more to make than any of those good ol' flicks, hence it was not cheap but overdone in an attempt to make it feel that way. When you're using a massive amount of special effects to make it look cheesy and crappily made, HOW DOES THAT MAKE ANY SENSE WHATSOEVER? If they were really going to do a cult horror movie in a true homage, it should have been shot the same way too - that poor production was part of what made them fun and entertaining and classic. So, Planet Terror was what could have been a great mind-numbing zombie romp, but turned out to be a cut of fillet mignon cooked extra crispy. And there are few things more disappointing than overdoing what could have been wonderful.

Second, if I wanted to get an hour of airheaded girltalk dialog that had no real point whatsoever, I could have turned on WE on TV or gone to a local highschool or two. Tarantino took one thing that always bothered me a little bit about his otherwise-excellent films and saturated this one with it - he just made me feel like he was out to prove once again that he can fit a lot of big words and sentences and profanity into any given conversation that takes place, ever. There is nothing interesting about taking 4 girls babbling about the same things over and over and stretching it to coat a major portion of a movie. EVER. Yeah, I know you can write, Tarantino, I've seen your good movies. Kurt Russell was excellent in his part, and the action scenes were one of the only redeeming parts of this whole mess they threw together.

So go for the awesome trailers interspersed throughout, see Kurt Russell get medieval on some frustratingly annoying girls, and make sure your theater has comfortable seats for the other 2.5 hours of nap time you stand to get out of this one. If you were keeping score, it would be Quentin Tarantino 1, Robert Rodriguez 0. A "Grindhouse" was a type of inner city theatre that would play all night marathons of low-budget exploitation films in the 1960s, '70s and early '80s. These down 'n' dirty theatres would often show offbeat ultraviolent and sexually charged films under the categories of Kung Fu (Shaw Brothers films), Hixploitation (White Lightning, Gator Bait), Blaxploitation (Shaft, Coffy, Superfly, Dolemite, The Mack), Sexploitation (Supervixens, The Swinging Cheerleaders), Zombie and Cannibal films (Dawn of the Dead, Zombi 2, Cannibal Holocaust), Biker films (The Wild Angels, The Glory Stompers, The Savage Seven, The Losers) among hundreds of other subgenres. In the suburbs during the 1960s and '70s, Drive-ins were the equivalent to the inner city Grindhouses. You could see many of the same kinds of films from the convenience of your car. The title of Robert Rodriguez and Quentin Tarantino's first collaboration From Dusk Till Dawn (1996) was named after the catch phrase for the all night Drive-in movie marathons. Both Robert Rodriguez and Quentin Tarantino grew up watching these kinds of films in Grindhouse theatres and drive-ins in the 1970s and early 1980s. When they became friends in the early 1990s they often held Exploitation film double features in their own home theaters (and also at QT's Film Fests in Austin, Texas). Flash forward to 2006, the two moviemaking pals decided to recreate these wild nights for movie audiences around the world by making their own traditional Grindhouse-Drive-In double feature extravaganza complete with two raunchy horror films, fake exploitation film trailers, ads and other cool treats. First: Robert Rodriguez brings us "Planet Terror" in which a town is overrun by disease infected sickos. Then comes Quentin Tarantino's "Death Proof", in which a serial killer named Stuntman Mike murders people by the use of his stuntcar instead of a knife or machete. "Robert's film is Horror, it couldn't happen, but mine is Terror because it could."
Tweet